During this time of turmoil in Iraq, it is interesting to look back at that country and its history prior to Saddam Hussein coming to power. In the British Pathé archive, there are some fascinating stories and images from that beautiful, if troubled, state. This selection of 10 films includes footage of King Feisal, the construction of Iraqi oil fields, and vintage looks at Iraqi culture.

For those wanting more recent footage from Iraq’s history, these short overviews by John Humphrys document Iraq’s invasion of Kuwait in 1991, Operation Desert Storm, the fall of Iraq during the 2003 invasion, and the capture of Saddam Hussein by US troops.


The British mandate in Iraq came to an end in 1932 after twelve years. This film presents an intriguing picture of life in Iraq at around that time, including footage of the Iraqi army.


Full title reads: “Dover & London. A Royal Welcome. The King and Queen, the Prince of Wales, the Duke of York, the Duke of Gloucester, Prime Minister and Officers of State, greet King Feisal of Irak on State visit for first time.”

There is an interesting outdated spelling of Iraq used in the title card.


This short little film provides a glimpse of life in Baghdad during the 1940s.


This newsreel concerns the opening of a new desert oil field near Basra by the Iraq Petroleum Company. The Iraqi Prime Minister, Nuri Pasha al-Said, can be seen in the film.


This longer film, split across two reels, was made for the Iraq Petroleum Co. in the 1950s and documents life in Iraq – its political history, traditions, industry, and its religious life.


The Duke of Gloucester attends the enthronement of Iraq’s young King Feisal in Baghdad, 1953.


A revolution in Iraq sweeps away King Feisal and his Prime Minister. This newsreel takes a quick look at the life of the monarch, including his state visit to England and the inaugurating of an oil well at Kirkuk.

Prime Minister Kassem of Iraq is killed during a brief revolution in 1963. American commentary.

Further Viewing
There are simply too many interesting films to list here. Additional films can be found by searching our YouTube channel or our website. But we’ve selected this “bonus” film. It features Ernest Bevin and the Iraqi Prime Minister Sayyid Salih Jabr in Portsmouth, England at the signing of a new treaty between Iraq and the United Kingdom in 1948. 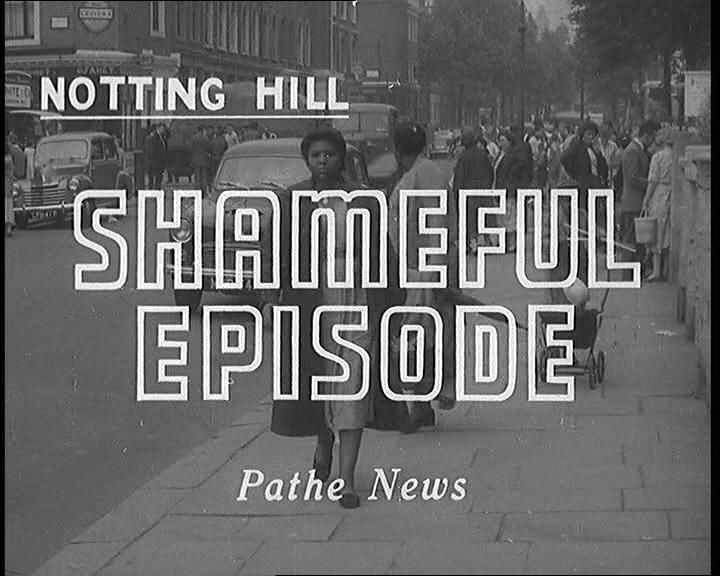 British Pathé produced a short newsreel on the attacks. The film has a very different tone to the sort of news broadcasts one would see on television today, at least in Britain. It is an angry denunciation of the riots, containing a particularly powerful commentary which is worth repeating in full:

Something new and ugly raises its head in Britain. In Notting Hill Gate, only a mile or two from London’s West End – racial violence. An angry crowd of youths chases a negro into a green grocer shop while police reinforcements are called up to check the riot, one of many that have broken out here in a few days. The injured victim, a Jamaican, is taken to safety. But the police have not been able to reach all the trouble spots so promptly and the quietest street may flare up at any moment. The most disturbing feature of the riots is the suspicion that not all the troublemakers are locals, for some of the gangs who break windows or throw bottles or burning torches have arrived by car. Opinions differ about Britain’s racial problems. But the mentality which tries to solve them with coshes and broken railings has no place in the British way of life. This violence is evil and the law and public opinion must stamp it out.

The 1958 newsreel can be viewed online here.

One of our archivists has set up a new blog site dedicated to the best images from the British Pathé collection. There’s only a few up there so far, but with a new one added each day, it’ll be sure to quickly become quite a gallery.

Unlike the company’s Facebook or Pinterest pages, the images on the new blog, Archivist @ British Pathé,  are shown free of all description or context, allowing the images to speak for themselves. Some of them, out of context, seem really quite bizarre! Which is, of course, part of the fun. Take this one – “A Bath With A View” (1931). But each image has a link to the original newsreel which you can watch online and find out what it’s all about and see if you’ve guessed correctly.

We hope you enjoy the images. Take a look at the new blog here. 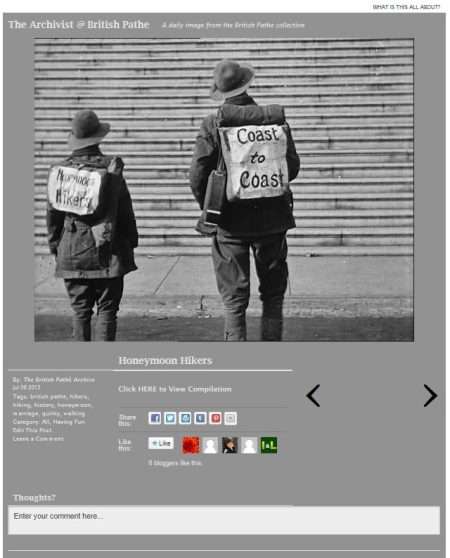 Earlier in November we blogged about four upcoming anniversaries which may have been of interest (see here). From now on, we’ll be doing this on a regular basis, pointing out events coming up in the calendar that we have some relevant footage for. So here’s our picks for the next two weeks… 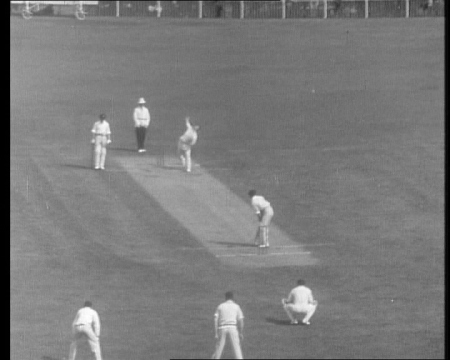 80th Anniversary: In 1932 England went to Australia to compete in cricket Test matches which would be known as the “Bodyline Tour”. 2nd December marks the opening day of the first Test, which England won.  Watch the match here.

It has also been announced that a statue of Basil D’Oliveira will be erected at Worcestershire County Cricket Club. See some footage of D’Oliveira in the archive. 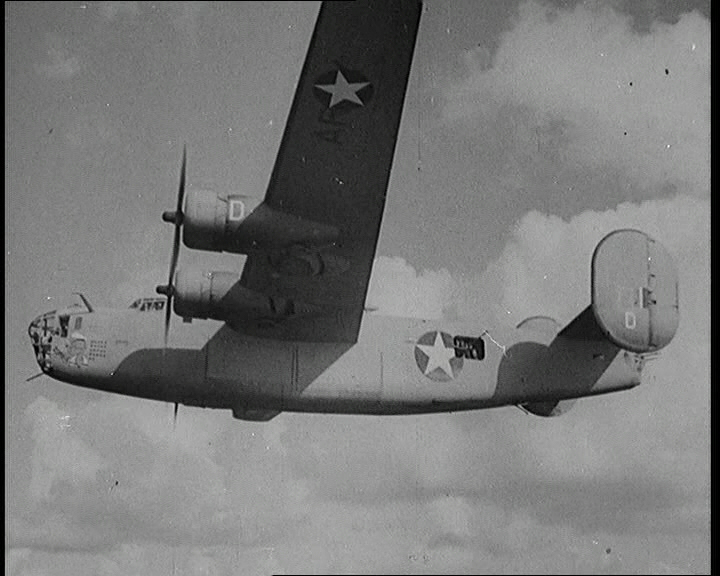 70th Anniversary: Days after Winston Churchill announced that Italy would continue to be bombed until they surrendered, the United States Air Force launched its first air raid on Naples. British Pathé has footage of USAF attacks on Naples, released in cinemas in January of 1943, as well as footage of the RAF missions. See the collection here. 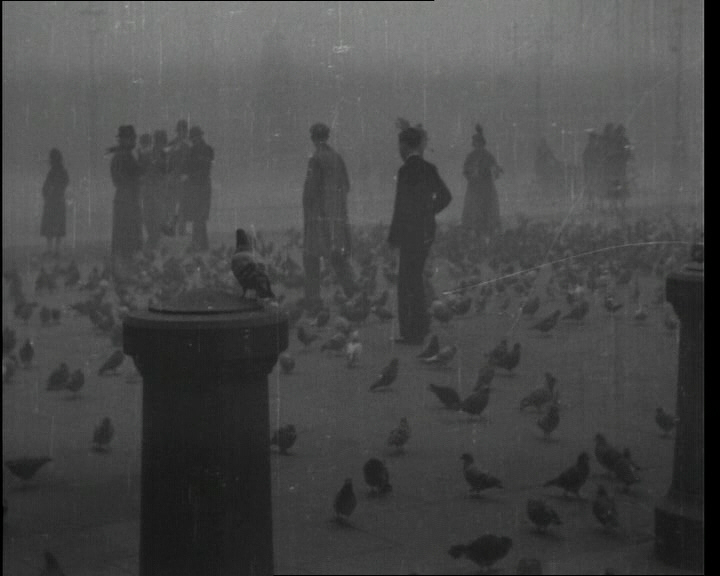 60th Anniversary: The Great London Smog of 1952. British Pathé holds some excellent footage from back when London was plagued with smog throughout the 1950s. Click here to see the clips. 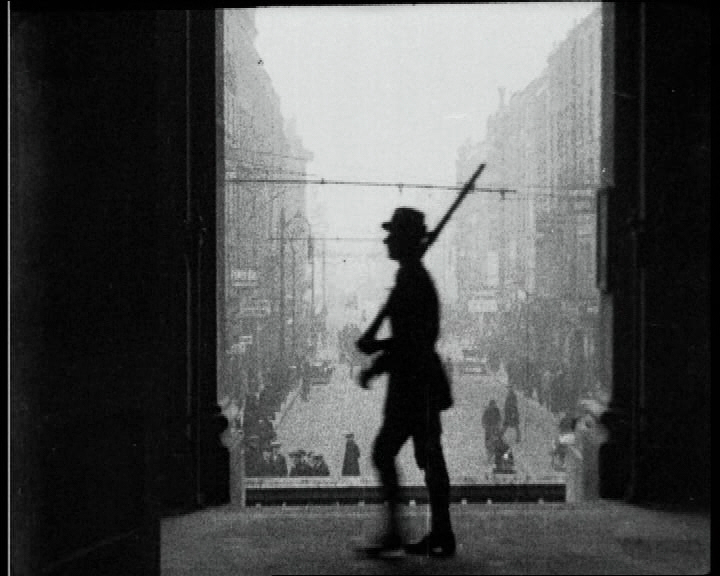 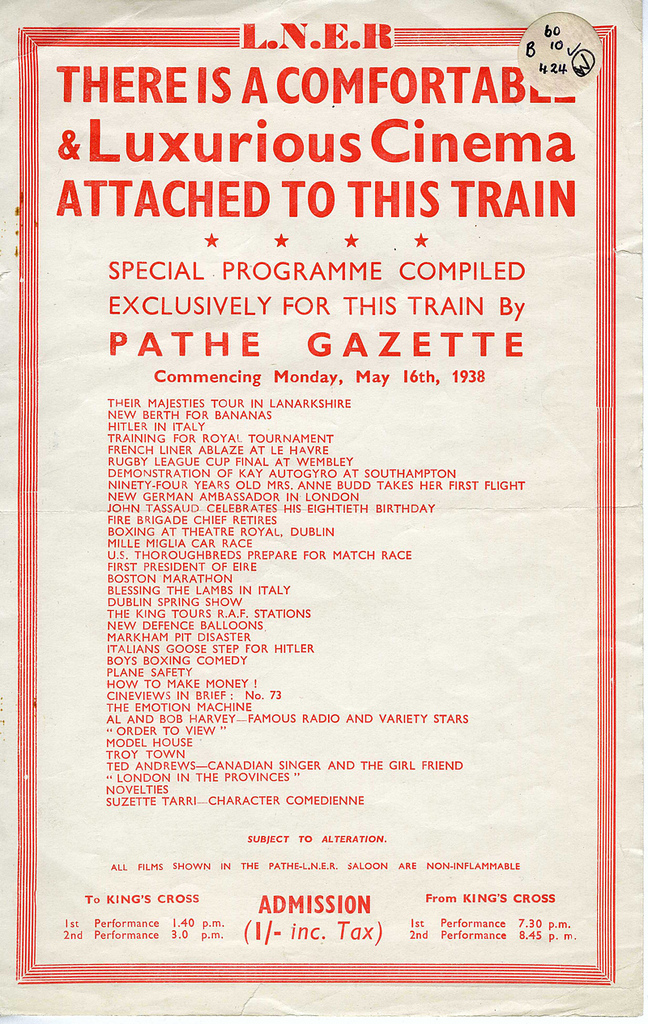 Who knew there used to be cinema carriages on trains? Or “saloons” as they were called…

Today we came across this exciting poster on the National Archives’ Flickr stream which reads – “There is a Comfortable & Luxurious Cinema Attached to this Train” –  “Special Programme Compiled Exclusively For This Train by PATHE GAZETTE”, Commencing Monday, May 16th, 1938.

The poster is for an LNER train, which is the London North Eastern Railway service, so trains going from Kings Cross to places like Edinburgh. We can just picture the classy and demure travellers as they relaxed in the “Pathé L.N.E.R. Saloon”, the countryside silently sliding past them as they tucked into a feast of the latest British Pathé reels.

The films shown on the train were actually issued only 7 days before the scheduled event, so it was pretty hot off the press. It’s interesting to see that Ireland is quite well covered, and also that boxing appears to be the most highly-sought sport.

The train’s cinema carriage wasn’t free – it cost 1 shilling – so it would have been a bit of a treat, but think about it – people didn’t have televisions in the 1930s and they had to go to a cinema house to see moving footage.  We love that the poster tells customers that the Pathé saloon is non-inflammable too! Of course earlier newsreels were made out of nitrate, and almost everybody smoked, so you can understand the concern.

ANYWAY. We were delighted to see that the poster then lists each reel that would feature in the screening. Using the date as a guide and searching the titles in the British Pathé film archive we’ve managed to find 32 out of 34 of the items on the trains bill, and we’ve put online links to each below so that you can pick and view the ones that interest you, or perhaps even re-live the experience and watch them all!

Their Majesties In Lanarkshire

Demonstration of Kay Autogyro at Southampton

US Thoroughbreds Prepare For Match Race

Blessing The Lambs in Italy

How To Make Money

London In The Provinces