On May 8th, Queen Elizabeth II officially opened Parliament and read the speech prepared for her by the Government listing the bills that would be put to the Houses during the course of the next year. Much is being made of Prince Charles’ unusual attendance, a sign perhaps of his increased role as the Queen grows older. The full text of the Queen’s speech can be read on the Number 10 website here.

British Pathé has a great many films of previous state openings of Parliament. But particularly noteworthy are the clips outlined below. Click the links to take a look.

State coach and escort leave by the Victoria Tower and turn past camera. 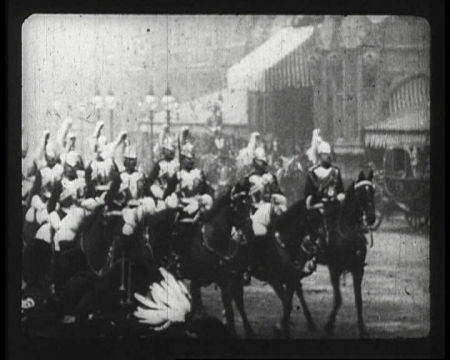 Description: Intertitle reads: “King George V Opens His First Parliament. Scenes from Buckingham Palace along with route to the Houses of Parliament”.

Scenes of the state coach carrying King George V with escort making its way along Mall through Horse Guards and arriving at Houses of Parliament for the State Opening of Parliament.

Description: Various shots of crowds in the rain, men from the Yeoman of the Guard file in to search vaults in House of Lords. The royal car carrying King Edward VIII (later Duke of Windsor) drives through, he has chosen a closed car because of the bad weather. He is wearing Admiral’s uniform and waves at the crowds. M/S as his car enters the Palace of Westminster.

M/S as he drives out again afterwards, crowds are still gathered to see him. M/S as his car enters the gates of Buckingham Palace.

Description: Royal coach leaving Buckingham Palace. Large crowds running towards the coach. King George VI and Queen Elizabeth (later Queen Mother) are see in coach. Various shots of the coach moving very slowly through packed London streets towards Parliament. Crowds cheering. Several shots of the Yeomen of the Guard preparing for the Royal Reception. Various shots of the coach returning to Buckingham Palace after opening of the Parliament. A car with Princess Elizabeth (later Queen Elizabeth II) and Princess Margaret follows the coach on the way to the Palace. 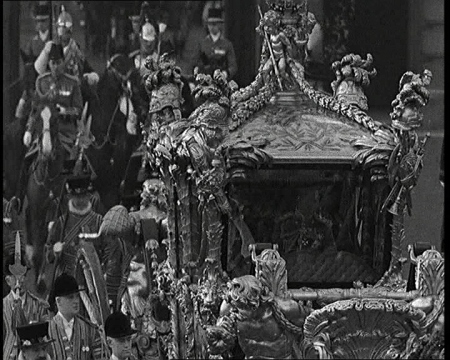 M/S as the Irish State Coach leaves Buckingham Palace, Queen Elizabeth II waves from it. M/S as it drives along. M/S travelling past Guard of Honour. M/S state crown in carriage. M/S parade. M/S Queen and Prince Charles, Prince of Wales, in carriage.  M/S escort riding along. M/S’s coach coming up Whitehall.   M/S as the coach arrives at Parliament and drives through gates.

There is also some very good silent footage of the interior from 1969.

The British Pathé archive acts as a resting place to several robots of yesteryear, some scarier than others, but today it was our beloved Robot George (born in 1950, Saffron Walden, Essex) who enjoyed his 15 minutes of fame in the British press.

Designed by Tony Sale in the 1950s, Robot George is made out of scrap metal from a crashed Wellington bomber. As Metro newspaper put it – “he was then consigned to the scrapheap of history” – also known as Tony’s garage, for over fifty years. Until now that was, when George was resurrected and dusted off before he is introduced to his new home – The National Museum of Computing at Bletchley Park in Buckinghamshire.

This fantastic 1950s video of George in his heyday is well worth a watch as you can see him moving his head, mouth, and then walking forwards with arms motions. It really is quite cult horror, merging upon slapstick comedy. Also in the clip can be seen a dashing young Tony, aged 19 in his RAF attire, rushing about adjusting George and controlling him with the radio handset.

To see Tony Sale and George back in the media today, check these articles from The Sun, The Telegraph and Metro:

Age Against The Machine – The Sun

We send Tony Sale our kind regards from all here at the British Pathé archive, and good luck to George in his grand new home!