I came across this canister of 1970s Hollywood footage (click on image below). The clip shows 1970s shots of people in the neighborhood, spinning signs that say ‘FAMOUS’ etc, and some nice footage of the Hollywood Sign looking pretty rough in the 1970s.

I decided to have a rummage for some other Hollywood footage, having been inspired by the Hollywood Sign’s Wikipedia page, and a bit of a Google maps binge looking at Griffiths Park (where the sign is) and how it’s a popular destination of not only tourists, but actress suicides, sexual cruising and illicit affairs. Does British Pathé have any film footage to shine a light on the controversy of California?

I started off with some commercial Hollywood advert newsreels, for holiday adverts weren’t as flat and full of stock footage as they are now, and you often catch glimpses of inside secrets –

This first Hollywood advert reel has great footage of The Great Race being filmed. Natalie Wood, Tony Curtis and Jack Lemmon stand on an artificial sheet of ice in the studio. We see Joan Crawford’s handprints and some re-enacted Wild West shoot outs.

This clip above shows helicopter footage of Mount Lee, and shots of the Universal City Sign. It’s a good clip for getting a perception of the landscape, the distances between the Hollwood sign and the mansions of Hollywood.

There are some fantastic old film award clips in the British Pathé archive too. One example from dozens is this video of David Niven collecting his Best Actor Oscar in 1959.

This San Francisco reel calls itself ‘Hollywood’s Playground’, filming wealthy yachting parties and private beaches. The narrator declares “The most mixed-up seaport that could ever exist”, “Even the oil workers look like actors”. This video goes behind the scenes on rehearsals, and has great clips of an American Football match. “You don’t need to understand the game to get the flavour of it all”. 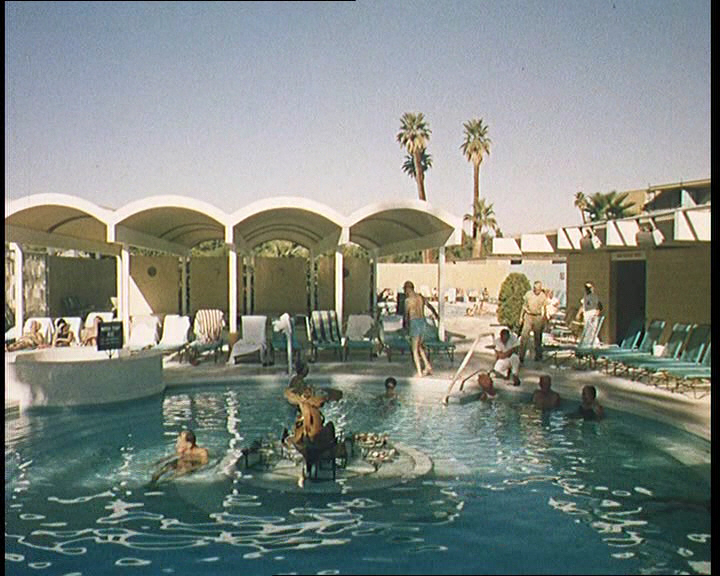 The English British Pathé narrators in these clips seem passionate about Hollywood, eager and even desperate to convince the viewer that California is the end of the rainbow. Just type in ‘Hollywood’ into www.britishpathe.com and find dozens of clips like this, so full of praise for Holllywood, but slightly unnerving too. The numerous clips of unknown starlets, mystery millionaires, golf buggies, gardners and steak diners. Is there an underlining sense of isolation and artifice beneath these vintage Hollywood clips of the past?